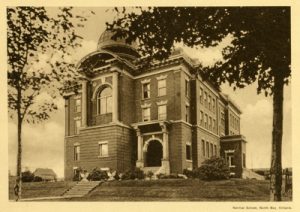 opened in 1909 and continued as the North Bay Teacher’s College between 1953 and 1973 when it was incorporated into Nipissing College as the Faculty of Education. The  yearbooks for the Normal School are a great resource for those looking for more information on the life of their family members who attended. Each yearbook lists the name of all the students and where they were from. As well, there are articles and photographs which reveal many of their activities during the year they spent as “Normalites” as they were called. 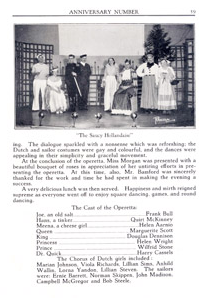 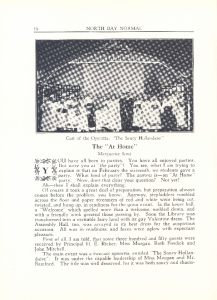 Archives and Special Collections – Nipissing University and Canadore College, holds a complete collection of these yearbooks, extending from 1909 to 1953 as well as North Bay Teachers’ College yearbooks, from 1954 to 1973. Later yearbooks (1953 on) had different titles: “Polaris,” “Aurora Borealis,” and “Vox Borealis”. There are also pdf copies of these yearbooks available. They are currently online at the ICSOH webpage. An index of names and of locations is available.

North Bay became a city in 1925 and celebrated by hosting an Old Home Week early in August. Thousands of visitors came and many of them had lived in North Bay at some point. These “Old Timers” were celebrated in various ways. A few had their stories published in the Nugget. The names of many more were simply published in the paper that week. The microfilm for that week is a little difficult to read, but the list of names published on August 7, 1925 has been transcribed by F. Noel and can be found, along with their place of residence at the time, in the following document: List-of-Old-Timers-1925. 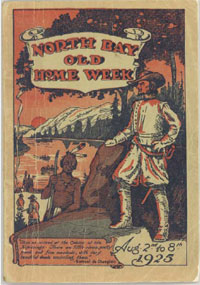 For more information on Old Home Week in North Bay in 1925 and 1935, including transcripts of several articles about the history of North Bay published in the Nugget, see the series of blogs by F. Noel:

While the old records at the Nipissing District Land Registry Office were being inventoried by members of Apolrod, three old registers were discovered which contain important information relating to early settlers. The Land Registrar gave permission for these books to be copied and the information is provided here for research purposes.

The period covered by these records is: